All the fee ground and the Mineral Interests are currently leased to Gold Standard Ventures Corp (NYSE AMERICAN: GSV, TSX: GSV) (“GSV”) and cover certain portions of GSV’s Railroad-Pinion Project currently being developed as a heap-leach mining operation (the “Lease”). The Lease provides for a combined 0.436% net smelter returns royalty (“NSR”) and annual lease payments of US$79,800 (the “OR Transaction”). The Mineral Interests and Leases cover large portions of the Pinion, Dark Star, Jasperoid Wash deposits in the South Railroad Complex as well as portions of the POD and Bald Mountain zones in the North Railroad (see Figure 1). The Company first announced the OR Transaction in a press release dated November 2, 2020 (the 11/2/2020 Press Release”)

The OR Transaction
Ely Gold paid total consideration of US$1,300,000 cash and issued 300,000 common stock warrants (the “Ely Warrants”) for the OR Transaction. The Ely Warrants have a five-year term and will have an exercise price of CDN$1.14. Securities issued under the Ely Warrants will be subject to a four-month hold period. In connection with its assistance with both transactions, Ely Gold has paid a cash finder’s fee to R&R Land, Mineral & Oil LLC (R&R) totaling US$65,000.

Railroad-Pinion Project
The Railroad-Pinion Project is an advanced stage gold project with a favorable structural, geological and stratigraphic setting situated at the southeast end of the Carlin Trend of north-central Nevada, adjacent to and south of Nevada Gold Mines’ Rain Mining District.

On February 18, 2019, Gold Standard announced an updated Pre-Feasibility Study for The South Railroad portion of the Railroad-Pinion project consisting of the Dark Star deposit and the Pinion Deposit. Key Highlights of the Updated Base Case South Railroad PFS include: (all currencies are shown in US dollars):

On July 16, 2020 GSV announced the entering into a binding letter of intent with Orion Mine Finance relating to a series of transactions, totaling approximately US$22.5 million, including a term sheet to provide up to US$200 million of financing support to GSV, to help finance the construction of the South Railroad Project.

On December 2, 2020 and January 5, 2021, GSV announced the appointment of new senior management with strong experience in Capital Markets and mine development and construction.

Objectives of the 2020 Pinion development program include: 1) decreasing drill spacing on the Pinion Phase 4 ($1400 pit) inferred oxide resource for potential conversion to Measured and Indicated; 2) provide material for metallurgical testing; and 3) tighten the drill spacings near historic Cameco holes SB-136, an RC hole that intersected 102.1m of 1.38 g Au/t, and SB-162-99, a core hole that twinned and verified theSB-136 results with an intercept of 112.0m of 1.24 g Au/t.

All drill holes in the 2020 Pinion & Dark Star Main development programs are located on the Mineral Interests being purchased by Ely Gold. (see Figure 2) 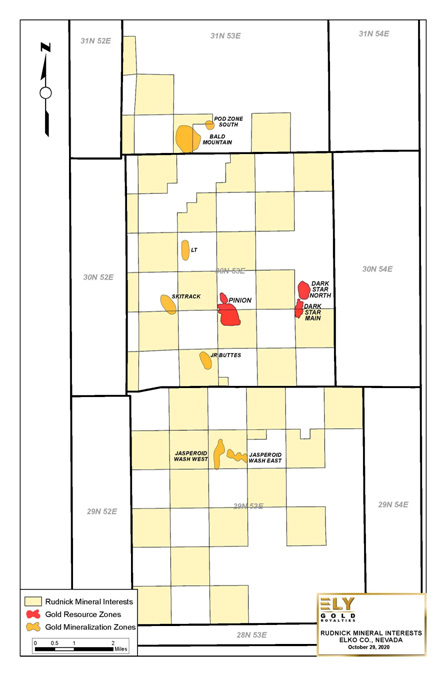 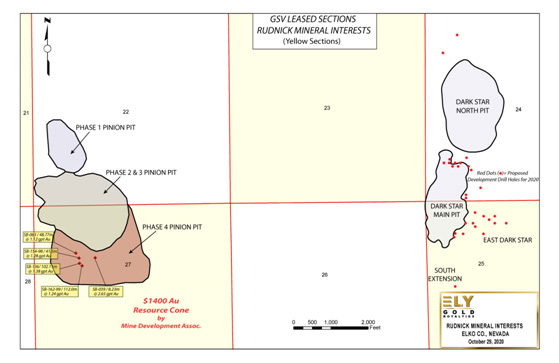 Qualified Person
Stephen Kenwood, P. Geo, is director of the Company and a Qualified Person as defined by NI 43-101. Mr. Kenwood has reviewed and approved the technical information in this press release.

About Ely Gold Royalties Inc.
Ely Gold Royalties Inc. is a Nevada focused gold royalty company. Its current portfolio includes royalties at Jerritt Canyon, Goldstrike and Marigold, three of Nevada’s largest gold mines, as well as the Fenelon mine in Quebec, operated by Wallbridge Mining. The Company continues to actively seek opportunities to purchase producing or near-term producing royalties. Ely Gold also generates development royalties through property sales on projects that are located at or near producing mines. Management believes that due to the Company’s ability to locate and purchase third-party royalties, its strategy of organically creating royalties and its gold focus, Ely Gold offers shareholders a favourable leverage to gold prices and low-cost access to long-term gold royalties in safe mining jurisdictions.