Royalties include .33% NSR on the Sleeper Mine,1% NSR on the Lincoln Hill Property and 1% NSR on Mt. Hamilton Project

Vancouver, British Columbia – August 11, 2020 – Ely Gold Royalties Inc. (TSXV: ELY) (OTCQX: ELYGF) ("Ely Gold” or the “Company") is pleased to announce that the Company, through its wholly owned subsidiary Nevada Select Royalty Inc (“Nevada Select”) has signed a binding term sheet purchase for a package of three net smelter returns (“NSR”) royalties from prospector Ken Snyder (“Snyder”) for US$350,000 cash (the “Transaction”). The royalty package includes a 0.33% NSR on the Sleeper Mine (the “Sleeper Royalty”), a 1.0% NSR on 38 unpatented mining claims in Pershing county Nevada (the “WR Royalty”) and a 1% NSR on 40 acres of fee ground in White Pine County, Nevada (the “Monte Cristo Royalty”). The Transaction is subject to final documentation and closing is expected to be September 15, 2020.

The Sleeper Gold Project (“Sleeper”) is 100% owned by Paramount Gold Nevada (“Paramount”). It is a former high-grade open pit gold producer located approximately 25 miles northwest of the town of Winnemucca, Nevada. The Sleeper Mine was operated by AMAX Gold Inc. (“Amax”) from 1986 until 1996, producing 1.66 million ounces of gold and 2.3 million ounces of silver. Paramount acquired the Sleeper Mine in a merger with X-Cal Resources (“X-Cal”) in August 2010. On September 28, 2017, Paramount filed a 43-101 technical report titled Amended Preliminary Economic Assessment, Metal Mining Consultants, September 2017 (the “Sleeper Report”). The Sleeper Report outlined a Pit constrained mineral resource using a mining and processing cost of $550 and precious metal prices of $1,300 gold and $16.00 silver as follows:

Highlights of the Sleeper Report include:

The Sleeper Royalty was granted to Snyder by X-Cal in June 2007. In April 2017, Paramount announced that it had closed a previously announced sale of a 2% NSR on the Sleeper Gold property to Franco-Nevada Corporation (NYSE: FNV) (TSX: FNV) for US$2 million

Trey Wasser, President & CEO of Ely Gold stated, “This transaction is a testament to our ability to make third-party royalty purchases due primarily to Jerry’s long-standing relationships throughout Nevada”. 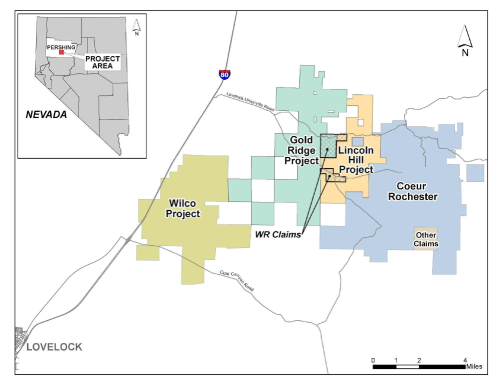 Jerry Baughman, President & CEO of Ely Gold stated, “This royalty package adds three excellent Nevada royalties to our portfolio. The price for the Sleeper Royalty compares very favorably to the Franco Nevada transaction which was completed in 2017 at $1,300 gold.”

Stephen Kenwood, P. Geo, is director of the Company and a Qualified Person as defined by NI 43-101. Mr. Kenwood has reviewed and approved the technical information in this press release.

Ely Gold Royalties Inc. is a Nevada focused gold royalty company. Its current portfolio includes royalties at Jerritt Canyon, Goldstrike and Marigold, three of Nevada’s largest gold mines, as well as the Fenelon mine in Quebec, operated by Wallbridge Mining. The Company continues to actively seek opportunities to purchase producing or near-term producing royalties. Ely Gold also generates development royalties through property sales on projects that are located at or near producing mines. Management believes that due to the Company’s ability to locate and purchase third-party royalties, its strategy of organically creating royalties and its gold focus, Ely Gold offers shareholders a favourable leverage to gold prices and low-cost access to long-term gold royalties in safe mining jurisdictions.