Vancouver, British Columbia, October 10, 2018 - Ely Gold Royalties Inc. (“Ely Gold” or the “Company”) (TSX-V: ELY, OTCQB: ELYGF) is pleased to announce that it has entered into a letter agreement (the “Agreement”) with Balmoral Resources Ltd. (TSX:BAR, OTCQX:BALMF) (“Balmoral”) whereby Ely Gold will acquire 100% of all rights and interests in the 1% (one percent) net smelter royalty (the “Royalty”) on the Fenelon Mine Property, operated by Wallbridge Mining Company Limited (TSX:WM) (“Wallbridge”), located in west-central, Quebec (see figure #1). 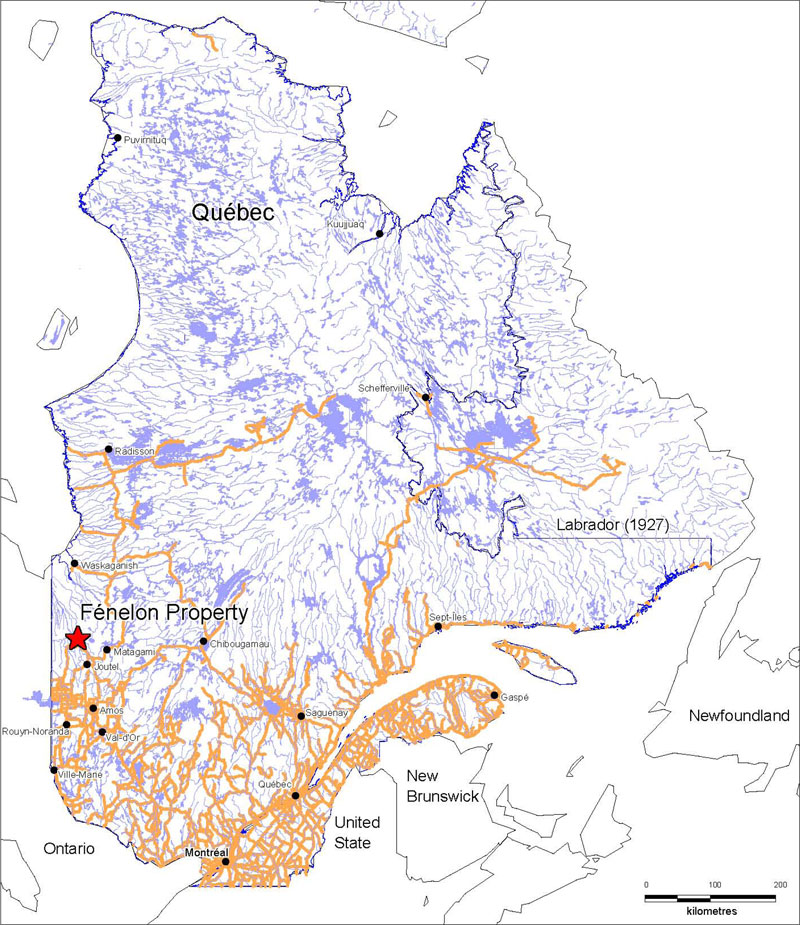 Under the Agreement, Ely Gold will pay Balmoral a cash consideration of Cdn$500,000, issue 1,000,000 Ely Gold common shares in favour of Balmoral and issue to Balmoral 1,000,000 full common share purchase warrants.The closing date of the proposed transaction is expected to be on or around October 15, 2018 and is subject to completion of a definitive purchase and assignment agreement, the acceptance by the TSX Venture Exchange and Wallbridge.The 1,000,000 Ely Gold shares to be issued under the Agreement will be subject to a regulatory hold period of four months following the date of closing. The strike price was set at Cdn$0.10 for the 1,000,000 common share purchase warrants based on the closing price of October 9, 2018 and they will have a term of 18 months.

Trey Wasser, President and CEO of Ely Gold commented on the Transaction, “We are very pleased to add another quality asset to our growing royalty portfolio. The Fenelon Property is demonstrating excellent grades in minable intercepts and the project operator has indicated its belief that the resource has significant potential for increased resources. We look forward to delivering more news on the high-profile Fenelon Property Royalty in the near future.”

The Fenelon Balmoral Royalty was created pursuant to a purchase agreement, dated July 25, 2016, between Wallbridge and Balmoral. The 1,052 hectare Fenelon Mine property hosts the Discovery Gold deposit and surrounding four km strike length of a gold-bearing shear corridor (see figure #2). Subsequently, Wallbridge completed an updated resource estimate for the Fenelon Property in 2016 (see Technical Report and Mineral Resources Estimate for the Fenelon Mine Property, August 2, 2016) and produced a positive pre-feasibility study (PFS) on the Mineral Reserves in 2017. (see Technical Report on Wallbridge’s Sudbury Area Properties, Ontario (Canada), December 31, 2017), both reports are available under the Wallbridge issuer profile at www.sedar.com. 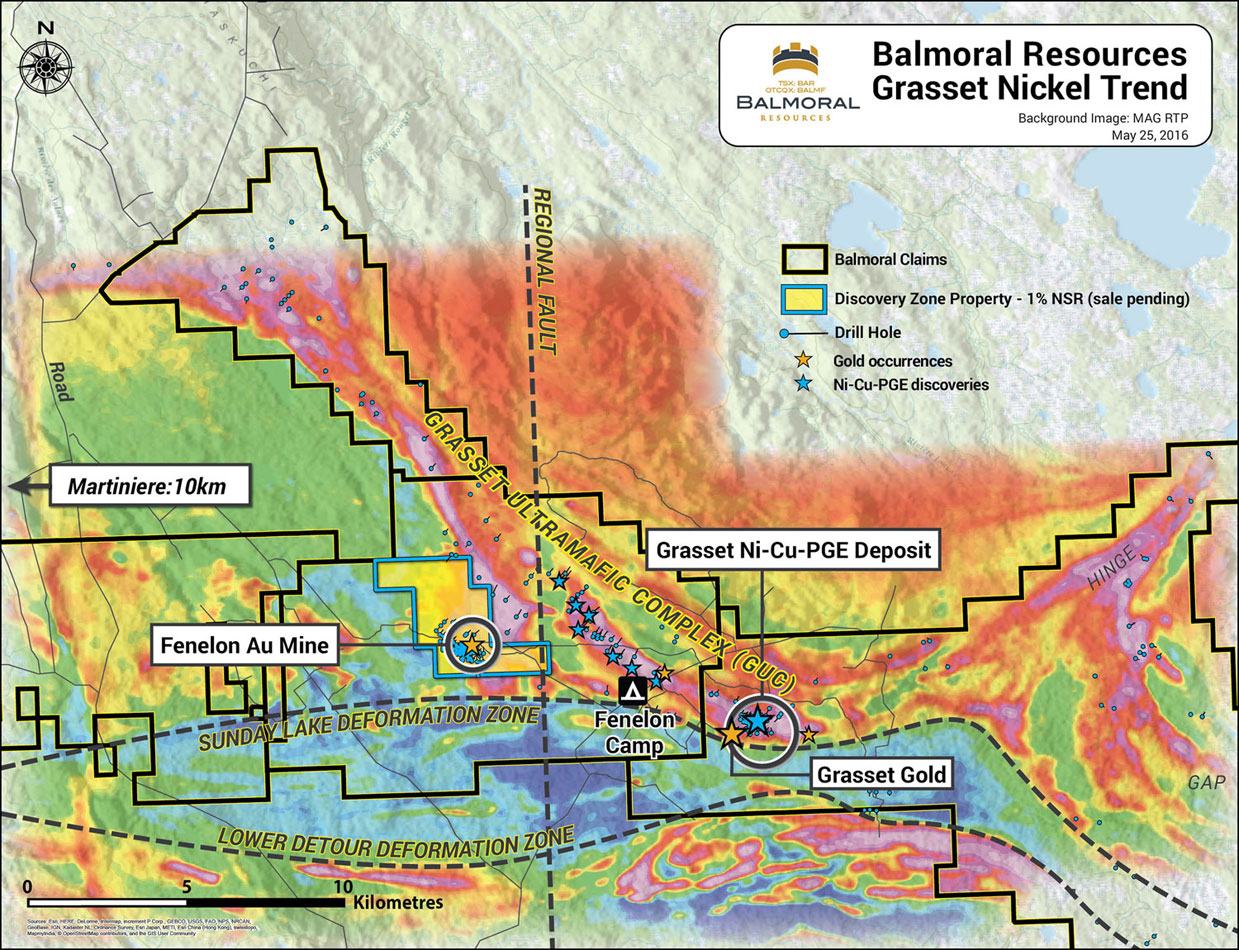 The 2017 Mineral Reserves are as follows:

Since the acquisition, Wallbridge has announced the completion of 33 drill holes totalling 6,348 metres in three surface exploration drilling campaigns at Fenelon. Results from the surface drilling program confirmed the high-grade nature of the near surface mineralization at Fenelon and led the identification of new zones of mineralization proximal to the existing mine workings established in 2004. Highlights from the recent drill program include:

Underground drilling outside the confines of the historical and current resource envelope was anticipated to have commenced during the current quarter.

Ely Gold Royalties Inc. is a Vancouver based, emerging royalty company with development assets focused in Nevada and the Western US. Its current portfolio includes 24 Deeded Royalties and 22 properties optioned to third parties. Ely Gold’s royalty portfolio includes fully permitted mines, mines under construction and development projects that are being permitted for mine construction. The Company is actively purchasing existing third-party royalties for its portfolio and all the Company’s Option Properties will produce royalties, if exercised. The royalty and option portfolios are currently generating significant revenue. Ely Gold is well positioned with its current portfolio of over 20 available properties to generate additional operating revenue through option and sale transactions. The Company has a proven track record of maximizing the value of its properties through claim consolidation and advancement using its extensive, proprietary data base. All portfolio properties are sold or optioned on a 100% basis, while the Company retains net smelter royalty interests. Management believes that due to the Company’s ability to generate royalty transactions, its successful strategy of organically creating royalties, its equity portfolio and its current low valuation, Ely Gold offers shareholders a low-risk leverage to the current price of gold and low-cost access to long-term mineral royalties.

Disclaimer:This press release contains certain "forward-looking statements" within the meaning of Canadian securities legislation, including statements regarding the Company’s contemplated acquisition of the Royalty relating to Wallbridge’s Fenelon Property, and Wallbridge’s stated plans for further near-term exploration and development of the Fenelon Property. Although the Company believes that such statements are reasonable, it can give no assurance that such expectations will prove to be correct. Forward-looking statements are statements that are not historical facts; they are generally, but not always, identified by the words "expects," "plans," "anticipates," "believes," "intends," "estimates," "projects," "aims," "potential," "goal," "objective," "prospective," and similar expressions, or that events or conditions "will," "would," "may," "can," "could" or "should" occur, or are those statements, which, by their nature, refer to future events. The Company cautions that Forward-looking statements are based on the beliefs, estimates and opinions of the Company's management on the date the statements are made and they involve a number of risks and uncertainties. Consequently, there can be no assurances that such statements will prove to be accurate and actual results and future events could differ materially from those anticipated in such statements. Except to the extent required by applicable securities laws and the policies of the TSX Venture Exchange, the Company undertakes no obligation to update these forward-looking statements if management's beliefs, estimates or opinions, or other factors, should change. Factors that could cause future results to differ materially from those anticipated in these forward-looking statements include the risk of accidents and other risks associated with Wallbridge’s mineral exploration, development and extraction operations, the risk that Wallbridge will encounter unanticipated geological factors, or the possibility that Wallbridge may not be able to secure permitting and other governmental clearances, necessary to carry out its stated plans for the Fenelon Property, the Company’s inability to secure the required TSXV acceptance required for the Transaction, and the risk of political uncertainties and regulatory or legal disputes or changes in the jurisdictions where the Company carries on its business that might interfere with the Company's business and prospects. The reader is urged to refer to the Company's reports, publicly available through the Canadian Securities Administrators' System for Electronic Document Analysis and Retrieval (SEDAR) at www.sedar.com for a more complete discussion of such risk factors and their potential effects